On November 5, 2015, the Royal Palm Beach Rotary Club welcomed new member, Lorna Kernizan, sponsored by Rotarian Michael Rose.  Lorna works for Palms West Hospital in Loxahatchee, as the Chief Operating Officer. Lorna began her career at Aventura Hospital in March 1994. She first became an active Rotarian at the Rotary Club of Weston in 2004. She relocated to Miami Lakes and became an active member of the Rotary Club of Miami Lakes. She currently resides in Pembroke Pines, but looks forward to relocating to West Palm Beach in the near future with her husband and two boys. 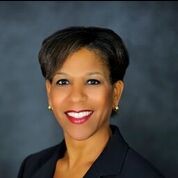 Rotary Club of Royal Palm Beach will meet at Hilary’s Restaurant and Deli in the Royal Palm Plaza on Tuesday mornings at 7:30 AM.
Please note that this is a location and day change.